This article introduces a general technique for achieving single-writer non-blocking hash tables at low to negligible cost. The resulting hash table requires no barriers (fences) or locked instructions on architectures such as x86/x86-64. Read operations are lock-free and write operations are fast and bounded. Insertion and deletion are wait-free. Probe sequence mutation is linearized for the common case, bounded and fast. Architectures with relaxed memory models still require barriers.

Non-blocking data structures and their benefits often come at the cost of increased latency because they require additional complexity in the common case. There are plenty of exceptions to this if the requirements of the data structure are relaxed, such as supporting only a bounded level of write or read concurrency.

For this reason, well-designed specialized non-blocking data structures guarantee improved resiliency, throughput and latency in all cases compared to alternatives relying on traditional blocking synchronization primitives such as read-write locks. Specialized concurrent structures are common place in the Linux kernel and other performance critical systems.

Efficient implementations of this mechanism for a cache-friendly double hashed hash table, a robin hood hash set and a hash set have been available in Concurrency Kit under the BSD license for a few years now. Hash tables relying on this transformation have seen more than 3 quadrillion transactions over the internet (and counting) across a diverse workload. This technique is used in a wide array of applications including the Backtrace database.

I started working on this problem because of a workload involving bursts of dozens of millions of writes every few minutes and a constant stream of latency bound read requests. For these reasons, I made sure to guarantee system-wide forward progress and forward progress for conflict-free operations in order to improve the flexibility of the data structure. Space efficiency was also important as the target systems were especially memory constrained. The mechanism allows efficient tombstones re-use and probe sequence modification, desirable in long-lived workloads.

The state-of-the-art at the time only provided many-writer many-reader (MWMR) hash table implementations that relied on chaining, CAS2 or complex object re-use constraints. In addition to this, all of these implementations provided MWMR-safety at the cost of increased memory and latency.

By constraining concurrency, a lower overhead lock-free hash table is easily achievable. This section introduces the mechanism with enough details to understand the Concurrency Kit implementations as well as to adapt it to your own data structures. Skip this section if you’re not interested in the details of the actual algorithm itself.

The hash table uses an open-addressed mechanism for collision resolution and consists of an array of tuples (k, v) where k and v are words that represent key and value respectively. These tuples are hash table buckets and are referred to as slots from hereinafter. All slots are initialized to (E, E). E is a sentinel value that indicates an empty value (no value). T indicates a tombstone. For demonstration purposes, slots are represented by the following structure.

The following functions are used in the examples:

In a single-writer scenario, the resize operation is simple. The old array is copied into a new, resized, array, made visible and then the old array is logically deleted. The old array is destroyed using your preferred safe memory reclamation mechanism. The store operation that makes the new array visible is the linearization point. Linearizability involving writer role migration across processors requires a full fence.

The version counter is observed before and after probing the hash table. The reasons for reading the version counter are described later in this article. The search function reads the contents of a slot using the following accesses:

On insertion, the v value is updated with an atomic store followed by an atomic store to k. A newly initialized slot transitions from the (E, E) state to a (k, v) state with an intermediate observable state of (E, v).

Slots that contain tombstones are re-used in order to mitigate tombstone accumulation and help keep probe sequence lengths short. If a tombstone slot is used, then the accompanied version counter update is made visible before completion of the insertion operation.

The only inconsistent states readers observe in the hash table involve mutations to slots that contain a tombstone. In the following execution history, a reader thread observes a stale key value.

The reader has observed the inconsistent (k = "apple", v = "vegetable"). In order to address this, the version counter is read before and after the slot read operations in get.

Inconsistent slot states are only observable by concurrent get operations that observe slots before deletion and after re-use. If slot re-use is observed then the accompanied version counter update was ordered prior to it (line 10). If D + 1 is observed, then the slot key must be T or updated key value (which implies an up to date and consistent value field due to the fence on line 14). If the old slot key and new value were observed, then the old value of D must have been observed.

Some open-addressed hash tables require modification of an item’s probe sequence. The versioning scheme described here allows for this, and is utilized by Concurrency Kit hash tables to opportunistically reduce probe sequence lengths.

State-based reasoning is used to provide an informal but clear proof of correctness. The states are represented as 3-tuples that are constituted by the key, value and a version counter. The 3-tuple is always accessed in the following manner by a reader:

The state machine below illustrates the lifecycle of a slot as it transitions from empty (state 1), to occupied (state 3), to deleted (state 5) and then finally to occupied again (state 7). 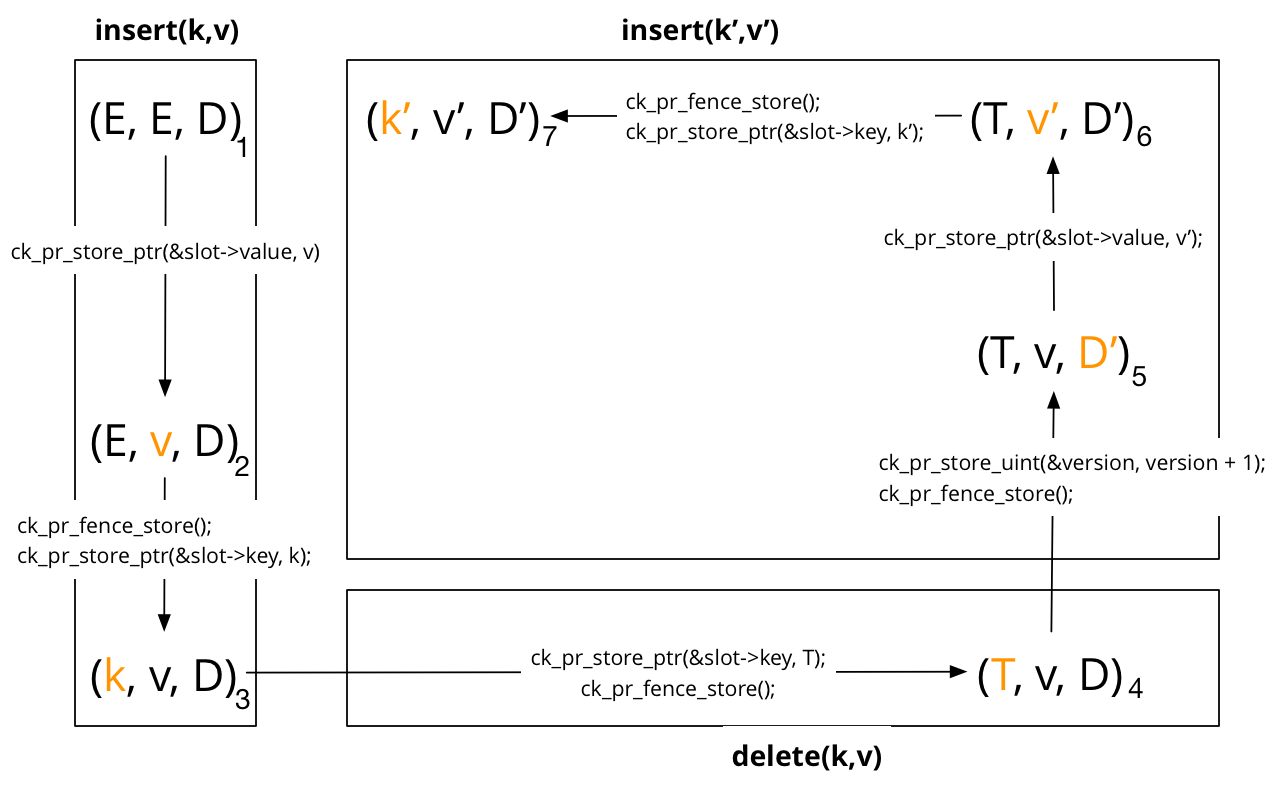 If the writer was to crash at any point during these operations, there are no inconsistent slots and readers are only required to restart the load operation once. Readers are linearized by the last load of a key field once the version number check has passed. If the role of active writer can be transferred across threads, then the version counter must be incremented during insertion before any slot field is over-written. If linearizability is required between writers that execute on different processors then a full fence is also required. This scenario may occur in situations where a writer may crash and then another writer (on another processor) takes over the role of single writer.

The requirement for movement is that the key-value pair remains consistent and reachable by readers at all times until a delete operation. In addition to this, re-use of the old slot is permitted at any point. A different representation for the state machine is used here. The key-value pair in the middle slot is being moved into the first slot. A shared version counter is used here that is in the third slot position. The movement is achieved by copying the middle pair into the first slot (completed at state 3), incrementing the version counter (completed after state 4) and then marking the old slot with a tombstone. The ordering of all these operations must be retained.

The above implementation is not linearized with respect to writers that can migrate roles (early termination) because the sequential specification of the hash table is violated if termination occurs in states 3 or 4. If termination safety and/or linearizability is a requirement then a full fence is required to order the operations with respect to each other and a writer must always check for the presence of a previously uncompleted operation.

This algorithm does not provide strong memory ordering guarantees. If an implementation requires stronger ordering guarantees then synchronizing instructions are required prior to the hash table operations. It is also possible to amortize full barriers with barriers on the update and load path.

There we are, a non-blocking SWMR hash table with no atomic operations or memory barriers on the fast path for TSO that is linearized for the common case. There are still avenues for improvement (barrier deferral being one) and patches are welcome. If you require wait-free reads, then writer non-blocking progress can be sacrificed in favor of grace periods instead of version counter updates.